If you work from home introducing indoor plants to your home office can make you more productive.

This sounds like a pretty good deal if all you have to do to get ahead in the workplace is to pitch up a few cacti in plant pots and let nature work its magic.

From improved air-quality, to increased productivity at work, the benefits of houseplants have been stacking up and clearly demonstrate they have the ability to improve our working days in multiple ways.

The reason for these positive relations is reputed to be captured by the biophilia hypothesis, which states that humans have an innate need to feel connected to nature. Stemming from times deep in evolutionary history when our entire sustenance depended on the resources and conditions provided by the natural world. Yet here we are in 2020, and the majority of us now live in cities, rather than in the countryside.

While our urban lifestyle may have increased productivity, it has also helped to sever the connection between human beings and the natural world, and scientists are only just beginning to uncover what this really means for us.

Multiple studies have now demonstrated that there are numerous health benefits to be gained from feeling connected to nature and one response to this research has been a focus on biophilic design.

Biophilic design is a concept which aims to integrate elements of the natural world into our cities, at the level of individual buildings as well as on a citywide scale.

However, an older and much simpler solution to bringing nature into our lives has also seen a resurgence in popularity, namely houseplants. From tiny succulents through to giant Elephant’s ear Alocasia there are now so many species of houseplants available to easily buy online that there is guaranteed to be one type of plant perfectly suited to every office environment, including yours. Our summary of the best desk plants can give you a helpful starting point to choosing which is a good companion for you.

For clarity, a houseplant is any plant which has been adapted to growing in an indoor environment.

While there is evidence of potted plants as far back as civilisation itself, the popular practise of growing plants indoors can be traced back to the 17th century, with the publication of ‘The Garden of Eden’ by Sir Hugh Platt in 1652.

Here we’re going to approach the question of ‘are houseplants good for you’ through the eyes on someone who works from home and is looking to create the best working environment possible with what little space they have to spare. The benefits of houseplants

We’ve tried to track the most credible sources to back up each of the below bullet points summarising the benefits of houseplants, and explore each point further in this article.

I guess it was only mildly surprising to learn that the vast majority of popular claims have in fact been backed by peer reviewed studies. Of course there are some outlier claims that belong in the woo-woo camp but by in large the following benefits of houseplants can be claimed as true.

For our home office worker the most tangible benefits brought by houseplants can be summarised as:

The psychological benefits provided by plants

Research has uncovered that having houseplants intertwined in our office spaces can have positive implications on our mental health.

A 2014 study compared two differing office concepts, one of which features indoor plants, while the other is stripped of extraneous decorations in order to flexibly accommodate varying numbers of people, and thus increase practicality.

The study was conducted in 3 large offices in the UK and the Netherlands and looked at the employees’ subjective perceptions of air quality, concentration, workplace satisfaction, as well as objective measures of productivity.

The results of the study were clear as day – offices featuring indoor plants consistently scored higher in all areas of study.

Employees were found to concentrate better, and work more productively, in offices that contained indoor plants.

Moreover, subjects consistently reported higher levels of workplace satisfaction than those working in the ‘lean’ offices. The benefits of indoor plants in an office

In addition to psychological benefits, studies have also shown that indoor plants have the ability to improve air quality.

A 1989 study by NASA looked into plant’s ability to remove toxic agents such as benzene, formaldehyde and trichloroethylene from the air.

It found that in addition to removing carbon dioxide, and adding oxygen, indoor plants did remove all of the studied toxins from the surrounding atmosphere, and thus improved air quality.

A follow-up study confirmed these results, while also showing that indoor plants have the capacity to remove other toxic agents, not investigated by the initial study.

Below is a list of indoor plants that were shown to be the most effective at cleansing air by the NASA study.

As each plant removes different toxic chemicals, it is advisable to have a diverse combination of house plants.

In addition to the actual plants, another study has shown that microorganisms present in the soil also aid ain removing toxic chemicals from the air. So, are houseplants good work companions?

From improved air-quality, to increased productivity at work, houseplants have the ability to improve our working days in multiple ways.

While preliminary results make a strong case for more research into the topic, it is apparent that introducing indoor plants into offices will have numerous benefits.

Besides the active benefits that plants have, they make us feel more connected to the natural world, which in turn has huge implications for our general state of well-being.

Research in environmental psychology has implied that people’s desire to connect with nature may serve the important adaptive function of psychological restoration, after hours of directed attention in the workplace resulting in attention fatigue. However, empirical data for this is yet to be collected.

Nonetheless, it is evident that nature inspires us.

On a superficial level indoor plants are decoratively appealing objects which pleasantly transform the atmosphere of any workplace. Thus, it is not a stretch to say that having indoor plants in offices is an effective method to improve the quality of life of the employees working there. 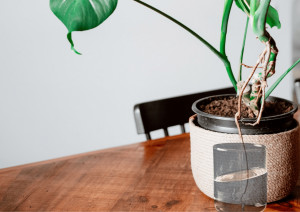 Will any harm (such as root rot) be caused by submerging Monstera aerial roots entirely in water? Our plant experts provide the answer here. Nepenthes plants or pitcher plants are renowned for their carnivorous pitchers. When can you expect these pitchers to finally grow?