What Light Spectrum Is Best For Flowering Indoor Plants?

Encouraging indoor plants to grow and flower is best achieved under light that mimics the properties of the sun’s rays. Replicating these conditions for houseplants means providing light from a full spectrum grow light.

Full spectrum lights as the name suggests emit light of many wavelengths from across the visible light spectrum. This variety exposes plants to most of the types of light that is crucial for plant development during all stages of the growth cycle. To encourage flowering in particular the spectrum of light provided to indoor plants should include a moderate to low red light (600nm – 700nm) to far-red light (750nm – 850nm) ratio.

Commercial horticulturalists customise their ‘recipe’ of light to include desired proportions of blue, red and green light that encourage particular growth responses in plants. This is useful to best provide for the particular needs of an individual species, or end goal (i.e. are more flowers desired, or is foliage yield more important?).

Keep in mind that irrespective of the proportion of  blue/green/red light that is emitted by a full spectrum light, it will generally improve the overall health of your indoor plants and make them more likely to flower.

If you don’t have access to plentiful natural light in your home, you might want to encourage flowering by supplementing artificial light from a grow lamp. If you want to know our pick of the bunch you can find our desktop grow lamp guide here. 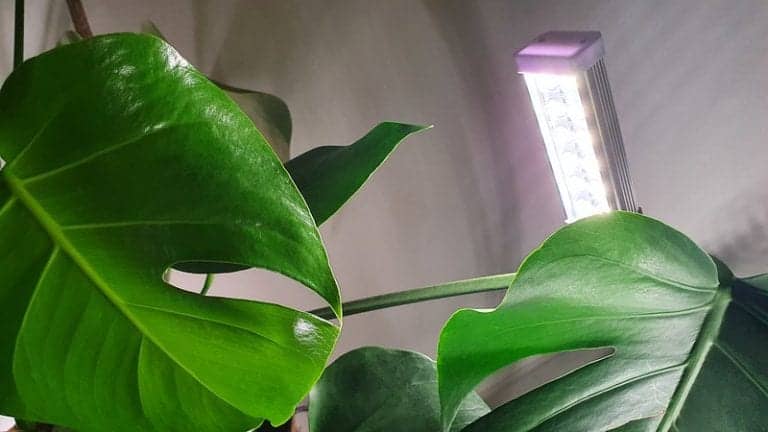 What wavelength of light helps indoor plants to flower?

Houseplants thrive in conditions that are as similar as possible to their natural habitat.

For example, if a plant is native to an arid desert, such as succulents like Aloe Vera, they should be grown in free-draining sandy soil. If a plant is naturally found in a rainforest (such as orchids), it should be kept in a room that is high in humidity, like the bathroom.

Whilst not all plants require the same growing medium, when it comes to light they do all share a common natural light source, the sun, which is essential for carrying out photosynthesis and growing.

The best type of light for growing indoor plants and helping them flower is one that is as close as possible to the properties of natural light. This means a range of wavelengths rather than the limited spectrum provided by conventional indoor light bulbs.

Wavelengths of light that are of particular value to helping plants flower are….

In addition to providing red and far-red light, full spectrum light also includes photons of wavelenghts that benefit the general health of plants.

Why are LEDs used as grow lights?

LED stands for Light Emitting Diodes, which are diodes that are composed of silicon crystals and other elements which release energy as light when supplied with electricity.

LED lights make excellent grow lights. In fact, they were actually designed for that very purpose by NASA, who were researching ways to provide light for food crops to be grown during long space voyages. Therefore, they are capable of providing fantastic full spectrum light to help your plants grow AND bloom.

LED grow lamps operate as full spectrum lights because each of the individual diodes can be designed to emit a particular wavelength of light. This allows any desired ratio of blue:green:red light to be formulated.

Moreover in testing, LED lights have been shown to last up to 40,000 hours longer than regular incandescent bulbs. Do the calculations and we are talking about an extra decade or more on the life of a bulb. They are also far more energy efficient and will save you money on your electricity bill.

Why are fluorescent lights used as grow lights?

Fluorescent lights and compact fluorescent lights (CFLs) function when an electric current passes through a tube which contains a gas, typically mercury vapor and/or argon. These gasses give off energy in the form of UV light, which is converted into visible light by a coating on the inside of the glass tube.

However, when it comes to cost and durability, most indoor gardeners opt for budget LED grow lights.

The collage of wavelengths produced by natural light photons each play a crucial role in encouraging plant development. Where far red light is known to stimulate flowering, to actually reach the point where the plant is capable of maturing to the point of producing buds requires more than just light of that frequency alone.

A sudden change in the color of indoor plant leaves might be a cause for concern but should you worry when air plant leaves begin to turn a shade of red? In the absence of light, plants are unable to produce oxygen yet continue to respire and release carbon dioxide. Does this make our houseplants harmful?

1 thought on “What Light Spectrum Is Best For Flowering Indoor Plants?”