Why Is My Lithops Soft And Squishy?

Many plants inform you that something is wrong with their care by changing  texture or appearance. So you have good reason to be  concerned when you notice your Lithops has switched from being firm, with thick, hardy leaves and a sturdy structure – to unusually pliable.

A Lithops that feels soft to the touch indicates new leaf growth is imminent. As the outer leaves of a Lithops begin to shed, they will feel  more tender. New leaves begin to emerge days later, after which your Lithops will feel hard once again. Lithops plants can also become slightly softer and more wrinkly when they require watering.

It’s not usually a bad sign if a Lithops feels squishy or soft. In most cases, it’s just a part of the natural growth cycle of the plant. Even when a squishy texture on a Lithops is a sign of a need, it’s an easy enough fix as long as you take appropriate action.

In this article, we’ll aim to further expand on the reasons for a squishy or soft Lithops and how to address each concern.

Some topics we’ll address include: Lithops plants experience two types of growth per year. The first kind is the blossoming of a flower. This typically happens between August and September, or in other words, during the fall.

The first sign of this blossoming new growth can be seen when you notice the fissure or slit between the two Lithops leaves start to separate. It will only take a few days before you see a bud push its way up between the two leaves, eventually blooming into a yellow or white flower.

Only mature Lithops plants produce blooms, so they have to be three or five years old before they can begin to produce flowers.

As the blossom grows, you’ll also notice that the fissure further separates. This is when you’ll see new leaves starting to peek out from between them, but they will not fully emerge yet.

In older, mature Lithops plants, a Lithops may produce two pairs of new leaves instead of one, producing two bodies from the same system of roots. It is unlikely for a Lithops to have more bodies than that, but it’s possible – it just takes many, many years!

Winter is when new Lithops leaves fully begin to grow in. This may seem like unusual timing, but it’s because the new leaves are meant to quickly replace the old ones. New leaves use the old, shriveling ones to survive by sapping them of the moisture that they can’t easily get during the winter.

The new body and leaves of the Lithops will draw out the old leaves’ water slowly. To ensure smooth growth, you shouldn’t water a Lithops plant at all throughout this period. This is also when you’ll notice a Lithops getting squishy and soft, a sign of the wilting of the old leaves as they become thinner and more papery, their nutrients and water used up by new growth.

Our Favorite Succulents And Supplies On Etsy

What are the signs that a Lithops plant needs water?

As previously mentioned, Lithops plants may become softer when they require more water. This is why old leaves become so squishy and excessively soft, as they lose all their water to new leaves.

When a Lithops’ leaves aren’t yet ready to shed but have started to feel wrinkly and soft as they recess into the soil, that’s a sign that you need to give it some moisture!

Lithops plants have very low water needs and it’s much more common to accidentally overwater them than to underwater them. The plant’s thick leaves are capable of storing a lot of moisture at any one time. It’s almost impossible to underwater this plant unless you’ve been neglecting it for more than a season.

How often should I water a Lithops plant?

You should only be watering a Lithops plant from the end of the summer months to the end of autumn. In winter and spring, as well as in early summer, a Lithops plant does not need to be watered, as it is undergoing either new growth or total dormancy. Watering at these times can cause severe harm to the plant, and open up the risk of root rot or fungal infections.

During the months where a Lithops should be watered, you should only be doing so once every two weeks at the very most. In addition, it’s best to take visual cues from your Lithops, as some plants will have lower water needs than others, especially as indoor plants. A Lithops plant that needs watering will have slightly shriveled, softer leaves and very dry soil.

When watering a Lithops, ensure that you’re using either filtered water or rainwater and focus on watering the soil and roots, not the leaves. The pot should be well-draining to avoid root rot. If you’re unsure if your Lithops needs water or not, err on the side of caution and opt to not water it until you’re certain of its needs.

When you’re watering a Lithops properly, don’t be afraid to give it a very good drink! Bottom watering is an ideal method, as it gives the Lithops the chance to stretch its roots and you also avoid the risk of accidentally watering leaves. You should water the plant from the bottom until you notice slight moisture on the topmost soil levels.

Remove any excess water if necessary, allowing it to drain back out. You may need to return to the plant a few minutes after watering it to encourage extra moisture to leave via the drainage holes.

Lithops plants become soft and squishy when they’re pushing out new growth, which typically happens during the winter months. This is because new leaves are using up all the moisture in the old leaves until they shrivel and wilt away to make room for the young growth. This is completely normal and healthy, and no action needs to be taken on your part.

Lithops plants may also become slightly soft when they require watering, but this is rare due to how well and easily these plants store water. A slightly shriveled leaf and dry soil are the main indicators that you need to give your Lithops a drink, but avoid doing any watering during winter, spring, and early summer! 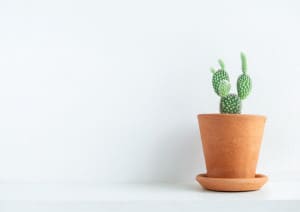 Drainage holes are crucial in plant pots for preventing root rot. But what if you're using porous pots, such as those made from terracotta?

From improved air-quality, to increased productivity at work, houseplants have the ability to improve our working days in multiple ways.